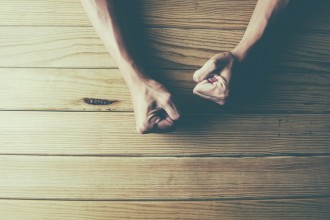 “You didn’t kill the baby, Gabe. It was already on life support when you got there and you tried.”

I want to assure everyone we aren’t talking about an actual baby. No children were harmed in the writing of this column. The analogy was just used by someone I was venting to.

It was a supportive thing to say, but he said it while asking me not to discuss the situation with him anymore. Turns out I was bringing him down by rehashing the events over and over again. It was at that moment I realized that what I was going through wasn’t just a run-of-the-mill event. It was a traumatic event, even if only to me.

What I’m going through is personal, and I am angry and deeply saddened by it. I needed help and he was available as a sounding board for as long as he could be. But my relying on him was starting to negatively affect his mental health. He had to draw the line for his own well-being. “It isn’t personal,” he said, “it’s just self-care.”

Traumatic Experiences Can Cause Depression

I really feel that people – myself included – don’t fully acknowledge the amount of trauma that we go through. We have this pie-in-the-sky idea that a traumatic experience is only war or death. Nothing could be further from the truth.

Like many things, trauma exists on a spectrum. Just because something is relatively minor by comparison, doesn’t mean that it hasn’t altered behavior or thinking. A minor car accident, for example, causes most people to drive more carefully, even if just for a short period.

Job loss, divorce, or the end of anything we care about all exist on the trauma scale and traumatic experiences can – and do – cause depression. How we deal with that depression determines how much of an impact it has on our lives. Not dealing with it can lead to loss of relationships, loss of pleasure, and even suicide. It’s important to acknowledge the role trauma plays in our lives so we can properly heal from it.

Traumatic Experiences Can Cause Anger

Trauma doesn’t always lead to depression. In fact, trauma leading to anger is common. While I don’t have exact statistics, I’d wager that traumatic experiences lead to anger more often than depression, especially long term. Many of us personally feel that way about something and most of us know someone who is angry about a past experience.

Not honoring that anger can lead to depression, or more anger – and that leads to more isolation. It’s a vicious cycle. The traumatic events I’m experiencing have left me angry and hurt, and by constantly involving my friend in that, I was wearing him down.

Luckily, my friend understands trauma very well and knows what I am going through. When he told me that he couldn’t be my sounding board any longer, he also suggested I seek counseling, reassured me that I had done nothing wrong, that he was on my side, and reminded me of all the things I was missing out on by not moving on.

Many people just start avoiding people who are experiencing trauma. The anger is perceived as negative behavior and, by abandoning a person who is, at his or her core, suffering, more trauma is inadvertently inflicted.

In my situation, I was letting what was happening control me and prevent me from experiencing joy. By admitting I was traumatized, seeking help, and working to move forward, I can minimize the impact of these events.

That’s what it means to be mentally healthy. It isn’t preventing bad things from happening, it’s not allowing them to keep you down. It’s working to move forward instead of rehashing the past. Moving past traumatic events and healing from all the bad things in our past is the only way to lead emotionally stable, productive, and happy lives.

That’s a goal worth aiming for.

This article originally appeared on Psych Central as, “Trauma and Anger and Depression, Oh My!”

PODCAST: Sleep And Its Effects on Mental Health
PODCAST: What Is A Daily Practice And How Would It Benefit Your Life?
By Gabe Howard|2017-08-07T10:11:09-04:00August 4th, 2017|Depression, Relationships|Comments Off on Trauma Spectrum: Confronting Depression & Anger