A Patient’s Definition of Bipolar 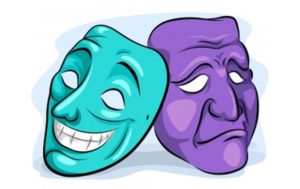 When I was diagnosed with bipolar disorder in 2003, I knew exactly one thing about it: Kurt Cobain, the lead singer of Nirvana, had it. And he died by suicide in 1994. As a Nirvana fan, I paid attention to the news about his life — and death — but, with the exception of repeating the diagnosis over and over again, little information about bipolar disorder itself was reported.

Essentially, I knew that a famous millionaire couldn’t beat it. I also knew it was a mental illness, which meant I was broken — so broken that I could no longer participate in society. Some of my earliest thoughts immediately after being diagnosed revolved around selling my house, quitting my job, and moving into a group home — things I never needed to do, but simply assumed I would have to.

When I finally was able to ask the doctor what bipolar disorder was, the response did little to aid in understanding:

A mental illness that brings severe high and low moods and changes in sleep, energy, thinking, and behavior.

At that moment, I had a better comprehension of advanced algebra — and I had failed math in high school.

How I Explain Bipolar Disorder

It’s been almost 13 years since I was diagnosed. In that time, I’ve learned a lot about the disease from a practical standpoint. As a speaker and writer, I’ve become skilled at explaining what bipolar disorder is in a way that the medical and educational establishments can’t. Because I live with the illness, I can go “off script,” for lack of a better term.

In my mind (no pun intended), bipolar disorder exists on a spectrum. On the very bottom is suicidal depression. At the very top is god-like mania. The bipolar individual vacillates back and forth between the two extremes.

To put it simpler, sometimes I want to die and sometimes I believe I am the creator of the universe and capable of all things. Literally going from massive confidence to massive self-doubt.

The oft-used comparison to temperature applies beautifully, since temperature exists on a spectrum, as well. Thirty-two degrees is warmer than zero, but colder than 72. Unlike the weather, we don’t have a science to predict the extremes of bipolar in advance. A meteorologist can predict the weekend forecast with some accuracy, but we can’t know where on the spectrum a person’s mood will be on any given day, or how long that mood will last.

Just like the weather has temperature extremes, it also has other factors. Thunderstorms, wind, and snow could line up with bipolar symptoms like anger, irritability, and aloofness.

Explaining what it is like to live with bipolar disorder isn’t something to be summed up in a single article. There are a lot of moving parts and the answer changes based on factors like age, gender, and whether or not the person is in treatment. Plus, every person is different in both biology, which is uncontrollable, to how hard that person works to recover, which is more controllable.

Day-to-day life is different depending on where I am on the spectrum. Bipolar depression is pretty much major depression. I often don’t write about that symptom because it is well understood in the mental health community.

The inconsistency in thinking, feelings, and behavior has made it difficult to form lasting relationships, as well as live a consistent and stable life. It hasn’t been until recently that I have started to consider the possibility that the other shoe may never drop.

I’ve been bipolar my entire life. At 39 years old, I look back and see three distinct parts of my journey:

More than anything, however, I realize that bipolar disorder will always take up some portion of my life. In the beginning, it owned me entirely. As I move forward, it has less and less control. There is no cure for bipolar disorder, so it will always be an unwelcome guest in my life. But, with each passing day, it loses its power over me just a little bit more.

I can never ignore bipolar entirely – that would be foolish – but lessening its impact on my life is a worthwhile and obtainable goal.

This article originally appeared on psychcentral.com as Bipolar Disorder: A Patient’s Definition