Do you ever wonder what you would do if your house caught on fire?  Do you see yourself rounding up the children, pets, and photo albums and hustling out the front door?  Maybe grab a cell phone to call the fire department and then wait for help to arrive on the front lawn? Most people don’t wonder about this. They have an actual plan.

What if I told you there was an epidemic in this country that is largely ignored by all levels of society?  This epidemic is eight times more likely to kill you than a home fire, yet the vast majority of the country is not talking about it at all. 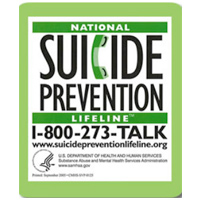 In 2013 (the most recent year for which data are available), 41,149 suicide deaths were reported in the United States, making suicide the tenth leading cause of death for Americans. That year, someone in the U.S. died by suicide every 12.8 minutes.

The effects of the suicide epidemic are far-reaching. For every person who dies, it is estimated that six people will be intimately affected. Scores more will have known the person in passing. The victims aren’t the only ones who suffer. The ones they leave behind suffer, as well.

Suicide affects everyone equally and is very misunderstood. Healthy, successful people are just as likely to be affected as the poorest. This is an epidemic that knows no boundaries. Ignoring suicide has only helped it become more prevalent.

Suicide is misunderstood because, in order to comprehend it, the instinct for self-preservation must be overcome.  People who die by suicide have already lost their own biological programming to stay alive. One could argue that those who fail in their attempts saved themselves at the last moment. But attempting suicide once dramatically increases the chances that it will be tried again.

Society pays little attention to suicide. Sure, there are whispers. But, ultimately it is thought of as someone else’s demon, someone else’s family.  Most of society is not able to recognize the warning signs; cannot tell if someone is reaching out for help.

This knowledge is more likely to be useful than “stop, drop, and roll.” How many people do you really think catch on fire in a given year?

The Warning Signs of Suicide

Some possible warning signs of suicide:

The single most offensive thing that is often said about suicidal people is that it’s just a cry for help. Yes, it is a cry for help, which is why we should give help to the people who are asking. Suicide isn’t about wanting to die; it’s about wanting the pain to stop. Sources of that pain include feeling abandoned, hopeless, and alone. If a person is reaching out for help and is ignored, it confirms what they already believe – that no one cares about them.

Another common misconception is that asking if someone is feeling suicidal will put the idea of suicide in the person’s head. As a mental health advocate, this one surprises me. Equally surprising is the notion that if a person is talking about suicide, they aren’t serious about going through with it. Nothing could be further from the truth. Talking about or even hinting about suicide is one of the ways people ask for help. Every threat of suicide or mention of suicidal feelings should be taken seriously.

It amazes me that we don’t see mental illness as a life-threatening disease in this country. We take murder much more seriously, yet there are more suicides than homicides in the U.S. every year. There are more suicides than traffic fatalities, as well. We tell our loved ones to be careful in dark alleys and to drive safely, but we ignore something far more dangerous. We must have the tough conversations and educate ourselves about suicide and mental illness.

We must be willing to ask people if they need help and know how to assist them. The value of doing so is priceless and will literally save lives.

This article originally appeared on Psych Central as “Suicide Prevention Should Be Taught Everywhere.”

3 Things You Must Understand About Depression
Mental Illness Crisis on a Cross-Country Flight
By Gabe Howard|2017-03-01T18:07:24-05:00March 1st, 2017|Suicide|Comments Off on Let’s Teach Suicide Prevention Everywhere