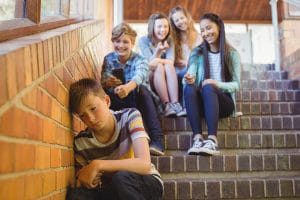 My name is Gabe Howard and I’m forty years old. I’m outgoing and charismatic, and I make my living as a writer and speaker. Despite a diagnosis of bipolar disorder, my adult life is stable and I’m content. When it comes to my childhood, many things stand out, but — even all these years later — the biggest defining event is that I was bullied.

I’m not certain why, 25 years after the fact, bullying stands out so much. It certainly wasn’t the only negative thing I was forced to endure as a child. Before I turned 12 years old, my biological father abandoned me, two of my aunts died, and I had suicidal thoughts almost every day.

Which Is Worse: Bullying or Untreated Mental Illness?

Only on the internet does someone debate whether it’s better to be a victim of childhood bullying or suffer from untreated mental illness. Neither is good and enduring both at the same time causes a kind of trauma that sticks with a person.

There are treatments for mental illness and some have been quite effective for me. The time from when I was diagnosed until I reached recovery with bipolar disorder was four years, but I made it to recovery.
The trauma associated with being bullied hasn’t eased nearly as much as the trauma associated with undiagnosed mental illness. As I mentioned, the effects of bullying have stuck with me to this day. So, for me, being bullied as a child had a longer lasting negative effect than being suicidal as a child.

And I’m pretty sure I know why.

The Difference between Being Bullied and Being Bipolar

For a moment, forget about me being suicidal as a child. The real issue, in my mind, is that when I was bullied, it meant that someone disliked me enough to intentionally want to hurt me.
The bullying, to this day, makes me doubt the intentions of those around me. When I first meet people, I can’t help but wonder if they are going to want to intentionally cause me harm. I was emotionally, mentally, and physically bullied by my peers.

Then, society justified its actions by declaring that bullying behavior was normal. “Boys will be boys,” “they’re just kids, they’ll grow out of it,” and “let them handle it on their own” was all I heard from the authority figures in my life. I’m certain this contributed to my distrust of authority figures.

The major difference between being bullied and being bipolar is that I expect bipolar disorder to want to hurt me, and that is a reasonable state of mind.

But, because of the bullying, I now expect people to want to hurt me. And that makes it harder to connect with all the great people in the world.

And that’s a shame.

My Life Is A Hair Pulling Experience!
Is Publicly Diagnosing the President A Question for Professional Ethics?
By Gabe Howard|2017-09-14T04:59:39-04:00September 7th, 2017|Depression, Mental Illness, Relationships, Suicide|Comments Off on Bullied, From Childhood to Twenty Five Years Later