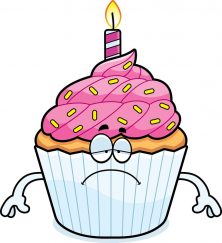 Long time readers of mine know that I do two things on my birthday every year:

I’m not a fan of my birthday because, frankly, nothing good ever happens. I am aware that nothing bad happens, but this time of year reminds me of how much time I’ve lost because of bipolar. It reminds me of my own mortality and it reminds me of all the things I haven’t yet accomplished.

Bipolar Disorder Shapes How We See Birthdays, Too

However, this year is a bit different for me. I’ve come to realize — even if I don’t fully accept — that while bipolar has certainly shaped my life in unexpected ways, I’ve created a self-fulfilling prophecy that I play out every year on my birthday.

My forty-first year has been one of remarkable accomplishment. I won seven different awards; the governor of Ohio gave me a proclamation (Everyday Hero); The Psych Central Show is not only a top 10 iTunes podcast, but now an award-winning show, as well.

The fundraiser I preside over, PEERdance and Walk, raised record money this past summer. I attended my first HealthEVoices conference and was honored to meet some of the coolest health advocates from all over the world. Hell, I even fulfilled my lifelong dream of owning a Lexus.

Yet, here I sit, feeling like an utter failure. I look at my 41st birthday looming and it makes me tear up because I’ve accomplished so little. If 20-year-old Gabe was here, I wouldn’t look him in the eyes I’d be so ashamed.

I think of all the people I’ve let down, all the misery I’ve caused, and all the mistakes I’ve made. Since they still fill me with deep regret, I can’t allow myself to consider that I’ve achieved anything. I feel as though I should be a failure and therefore I make myself into one.

Facts, reason, and reality be damned.

Every Birthday, I Let the Ghost of Bipolar Past Win

Here is where life with bipolar disorder gets complicated. In the present, I’m very accomplished. Maybe they give a couple awards out to people who’ve achieved nothing, but even I can’t deny that winning seven awards in a single year is an achievement.

The issue isn’t what I’ve accomplished this past year, it’s all the past regrets I can’t let go. My birthday just reminds me that I’m always going to feel bad for the hurt I caused other people as well as myself. My past mistakes are wrapped up with the trauma that living with untreated bipolar disorder caused me.

Many of these regrets were formed while I was still learning about my illness — a terrifying time. My memories of that period all feel the same inside my brain. Feeling suicidal, regretting the ending of my first marriage, losing my job — these all feel the same to me. And because all of those memories feel identical, when I think about any one of them — I feel the weight of all of them.

Moreover, every November 24th, I’m reminded of every mistake I’ve ever made and how awful living with bipolar disorder can be. It’s not a humbling reminder, either. It’s a horrifying one.

This year is no different, except I realized that looking in the present to fix the trauma of the past isn’t going to work. It’s counterintuitive, but sometimes the best way to move forward is by paying attention to what’s behind you. Because, no accomplishment can help me make peace with my past and, apparently, I’ve never going to see myself as a success until I do.

Whether I want to or not, I’m going to have to look my twenty-year-old self in the eyes.