How I Met My Schizophrenic Podcast Co-Host 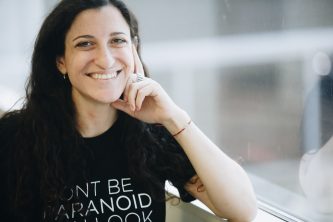 When I first met Michelle Hammer, she made exactly zero impression. I remember the conference we were both attending, but I don’t remember her. I have some vague recollection of a loud, inappropriate woman talking about meeting men on Tinder, but to this day, she claims it wasn’t her.

My first memory of “meeting” Michelle is was when she emailed about being a guest on The Psych Central Show. The email was pretty short and, frankly, not very inspiring:

“I’ve been following your facebook and social media and it looks like you’re doing some awesome stuff. I was wondering if you would like to collab in any way? One way I was thinking was being a guest on your Podcast. Of course it’s your decision.”

I had no idea who she was and, awkwardly, I had no idea what a collab was. I ignored the email, as I saw it as a pitch to get on the show. In any given week, I turn at least five people away who write me better pitches, so the decision to ignore her was an easy one.

Then she sent me a video that WebMD made about her life with schizophrenia. I did take a little more interest because they had recently hired me, but her pitch, again, was lacking:

“Hey! Watch my video that WebMD made about me!”

I didn’t watch the video and I didn’t reply to her until — through a series of odd events — I was on a panel to help choose a speaker. Michelle’s name was on the top of the short list and, frankly, the only one I recognized at all. So, I Googled her, looked at her website, and sent her an email.

A Late Night Conversation with a Schizophrenic

We began chatting, sharing our experiences, and, after a few weeks, fate intervened again and I was working on a project near her home. Michelle agreed to take a train, a bus, and walk two miles to meet me in New Jersey. We met in the lobby of my hotel where, after an obligatory hug, she started loudly proclaiming that she was wearing a cock ring. It was a weird piece of jewelry in the shape of a penis she wore on her finger for, well, I still don’t know.

My first impression was that she was loud, short, and energetic — and, despite my best efforts at ignoring her, she drew me in. I wanted her to talk softer and louder all at once. I wanted to explain to her how inappropriate she was and do whatever it took to make sure she didn’t stop. She was something I couldn’t put my finger on, but I was certain the world needed more of whatever it was she was doing.

I’m long past the point where I think that every person who lives with mental illness is a hero. Maybe I’m jaded; maybe the fact I’m bipolar makes me evaluate others in similar situations differently. More than anything, I’m tired of people thinking we are all heroes just because we’re not drooling all over ourselves.

Michelle, however, is different. She battles a terrifying illness with a quiet dignity that manifests itself in loud outbursts. She can command a room by sitting slumped over in a corner, exhausted. She doesn’t filter her words, maybe because she’s a schizophrenic or maybe because she’s a New Yorker.

To make life better for people living with mental illness, she designed a clothing line to educate and start conversations about mental illness. While the rest of us sit in the relative safety of our homes and write blogs or make social media memes, she stands on the streets of one of the most aggressive cities in America and explains to anyone who will listen that one in five New Yorkers will have a mental health crisis this year. She looks them in the eyes and doesn’t flinch.

She is one of the bravest advocates I know — and I know many amazing advocates. She pretends to be confident in a way I can’t help but admire. She’s scared of her Mama, but not of yelling “suck my d***” in a crowded room. She comes off as detached from and disinterested in the world and people around her, but has told me the story of a homeless man she saw “who probably has schizophrenia, too” no less than ten times. She’s outwardly confident and inwardly paranoid, a combination that I find uniquely exhilarating.

Collaborating with a Schizophrenic

Eventually, I figure out what a “collab” was and we decided to start a podcast titled “A Bipolar, a Schizophrenic, and a Podcast.” It’s a cool show where we talk about the past, present, and future through the lenses of people who live with mental illness. Michelle is reserved when the microphone flips on and censors herself in a way that is endearing, but extremely regrettable. I enjoy working with her because she makes me better at what I do. She is a good person to commiserate with, when she’s not singing Britney Spear’s songs at the top of her lungs.

If Michelle has taught me nothing else — and believe me, she’s taught me a lot — it’s that I need to pay closer attention to the awful pitches I get to be on The Psych Central Show. There might be another Michelle in there. . .

. . . Which is altogether exciting and terrifying.

This article originally appeared on PsychCentral as “How I Met the Woman Behind Schizophrenic.NYC“

3 Ways You Can Stop Blaming Yourself for Having Bipolar Disorder
Advice For Caring for a Loved One at Home
By Gabe Howard|2018-06-19T16:46:01-04:00June 19th, 2018|Mental Illness, Schizophrenia|Comments Off on How I Met My Schizophrenic Podcast Co-Host