Can I Understand Depression If I Don’t Have It?

I spend a lot of time struggling with how to describe what depression feels like. Partly because I’m a writer and partly because I want my loved ones to understand me, I’m constantly trying to find the perfect explanation. I feel as though I’ve come close using darkness as imagery and trying to build on what people understand about sadness and grief.

I’m always left wanting, though. The intended audience appears to have some level of sympathy, but I never really feel like they have any understanding.

Sympathy Toward Depression vs. Understanding

Once, during a speech, I told the audience that feeling heavy, hopeless, and alone isn’t even the halfway point of a depressive episode. Even though all of those things feel horrifying, they are still feelings. Being able to feel that suffering meant I was still able to feel something. Even though what I was feeling was painful and terrifying, it still meant I had a connection with my humanity.

The true horror of depression isn’t in feeling bad; it’s in not feeling anything at all. That level of suffering isn’t caused by being taken to a dark place. It’s caused by realizing that my mind is the dark place. 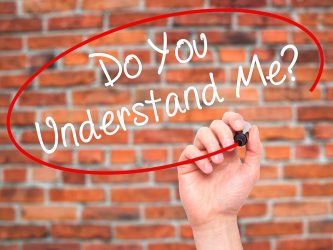 Becoming aware that my torment was internal was more than my fragile mind could handle and that’s when the real trauma began. I had mistakenly believed my suffering to be caused by an external force – something outside of myself. I was left trying to wrap my broken brain around the idea that the same mind I had to use to find an escape from the pain was the very same mind causing my misery.

It’s the equivalent of trying to use a broken tool to fix itself. It quickly became nonsense that demoralized me and the end result left me apathetic and unemotional. My deepest depression leaves me practically oblivious to my own consciousness.

When I finished speaking, I looked at the audience and many people had tears in their eyes. I was so pleased because I thought I had finally made people understand depression.

After the speech, many people came and hugged me and told me how sorry they were that I had to go through such a horrible ordeal. I realized, then, that they still didn’t understand depression – but they did now have sympathy for what I had gone through.

In some ways, understanding is overrated. Just because someone understands something doesn’t mean they care about it.  Besides, It’s not really possible to truly understand something unless you’ve experienced it yourself. So, while I do wish people understood what I go through when I’m depressed, I wouldn’t wish it on anyone.

To answer the question posed by the title — no. Someone who hasn’t experienced depression can’t understand it. That doesn’t mean people can’t be caring, sympathetic, and compassionate. We don’t need to understand the exact plight of another person to be kind.

While a person without depression may not be able to understand exactly what I go through when I’m depressed, I’m sure they do understand what it’s like to be scared, to suffer, to be lost, and to be alone.

Their understanding may be incomplete, but it’s not non-existent.

Worried you may have depression? Use Psych Central’s Depression Screening Test.

This article previously appeared on Psych Central as Can Someone Without Depression Understand It?

Narcissism and Bipolar Disorder: Interview with Dr. Ramani Durvasula
Mental Illness Isn't as Invisible as People Think
By Gabe Howard|2017-03-24T21:00:27-04:00March 24th, 2017|Depression|Comments Off on Can I Understand Depression If I Don’t Have It?